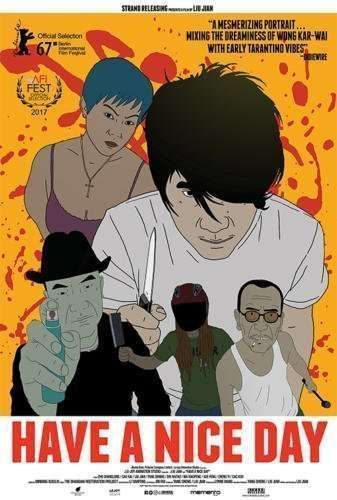 HAVE A NICE DAY

A FILM BY: LIU JIAN

OPENS THEATRICALLY IN NEW YORK ON FRIDAY, JANUARY 26 WITH A NATIONAL RELEASE TO FOLLOW

Filmmaker Liu Jian cements his place as a pioneering force in independent Chinese animation with whirlwind neo-noir HAVE A NICE DAY.

A hard rain is about to fall on a small town in Southern China.

In a desperate attempt to find money to save his fiancée’s failed plastic surgery, Xiao Zhang, a humble driver, steals a bag containing 1 million Yuan from his boss.

News of the robbery spreads fast within the town and, over the course of one night, everyone starts looking for Xiao Zhang and his money…

MUSIC BY: THE SHANGHAI RESTORATION PROJECT

Have A Nice Day - Official US Trailer HD