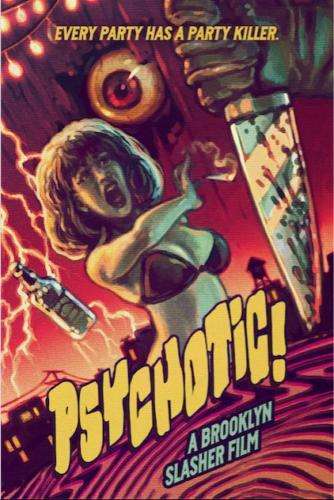 ​
Destruction Inc is thrilled to bring the psychedelic slasher to VOD January 26th and additional special screenings in Brooklyn!

The rent is high but the body count is higher in PSYCHOTIC!, the suspenseful psychedelic slasher that follows a group of hard-partying Brooklyn hipsters as they’re stalked and savagely murdered by a masked maniac known as the Bushwick Party Killer.

It’s up to struggling artists Tim and Stuart to figure out who keeps killing the life of the party. Blood-soaked mayhem ensues as our heroes barely make the rent on time, search for love (in all the wrong places), and try to salvage their friendship – all while trying to unravel the mystery and stay one step ahead of the next massacre.

On the tail end of its impressive festival run PSYCHOTIC! has been lauded for its visually striking Giallo style and its blood-soaked practical effects. Winner of Best Feature at the Cannabis Film Festival, Best NY Feature at the Upstate NY Horror Film Festival and Best Actress at The Lost Sanity & Sci-Fi Film Fest.

Don’t miss your chance to catch PSYCHOTIC! on iTunes, Amazon, Google Play, Vudu, Sony PSN, Xbox, as well as special screenings at the Nitehawk Theater in Williamsburg on the 25th, Film Noir Cinema in Greenpoint on the 26th, and Videology on the 27th.

DESTRUCTION INC is Derek Gibbons and Maxwell Frey, two filmmakers based in New York, New York. They met in 2001 at the Rochester Institute of Technology. Immediately they connected on their love of film (especially horror and exploitation) and began collaborating on shorts of their own. After years of experience producing award-winning work for The Onion, HBO and Cinemax, they’ve produced their first feature-length film. PSYCHOTIC! takes place in their hometown of Bushwick, Brooklyn, and is a dark twisty thriller in the tradition of 70’s Italian horror and 80’s slasher film.