It’s that time again, time to look back at some of the best of the previous year. So, in no particular order, (it was hard enough narrowing the list down, let alone ranking them), here we go.

A serious and shocking film from a totally unexpected source. Known for his sketch comedy Jordan Peele turns in one of the best genre films of recent years, a film that’s scary both for it’s fictional and real-world subject matter.

Based on the novel Cold Moon Over Babylon by Michael McDowell this shotgun wedding of Southern gothic and giallo traditions features some great set pieces and a plot twist that had me rewinding to be sure I actually saw what I saw. Griff Furst rises above his SyFy resume to deliver real scares here

Director Todd Sheets, scream queen Linnea Quigley and a pack of non-CGI werewolves, what more really needs to be said? 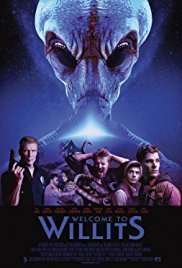 Directed by Trevor Ryan from a script by his brother Tim WELCOME TO WILLITS, (or ALIEN HUNTER if you’re in the UK) is a mix of paranoid pot farmers, lost teens, aliens and Dolph Lundgren as a TV cop.

The other indie werewolf film on this year’s list. Shawn Burkett goes in a direction 180 degrees removed from DON’T FUCK IN THE WOODS with the bloody and actually touching story of a woman bitten by a strange nocturnal creature.

The director of GUN WOMAN, Kurando Mitsutake is back with a wonderful tribute to grindhouse martial arts films. This is the kind of gritty tribute KILL BILL could only dream of being. It even steps outside the genre to pay tribute to the incredible ROLLING THUNDER.

Zombies in a strip club done right. There’s plenty of blood and boobs along with a bizarre black fluid that turns people into flesh-hungry creatures. Plenty of non-PC routines from the girls and a great lap dance decapitation. Oh and stay for the post-credit scene, trust me it’s worth it.

A total mindfuck from writer/director Emiliano Rocha Minter. A brother and sister roaming a post-apocalyptic city find an elderly hermit who makes them an offer may wish they refused. A twisted mix of extreme and art horror

A totally insane horror comedy that mixes slashers, zombies and ancient curses. An unstoppable serial killer is the only hope for the town of Argento when the dead return from the grave.

A Quebecois take on zombies with an emphasis on rural setting and interpersonal drama as well as bloody set pieces. With more intelligent than usual flesh eaters this film from Robin Aubert who previously helmed  Saints-Martyrs-des-Damnés helps keep the zombie genre fresh.

Bloody French art horror about a young woman discovering two rapidly growing appetites, one for sex the other for human flesh.

Totally batshit insane in all the right ways sequel to the disappointing alien invasion film from 2010. This one features Frank Grillo and Iko Uwais fighting aliens among the ancient temples of Laos. This one just never stops delivering the action.

Other films worth mentioning include THE LAPLACE DEMON, THE NIGHTWATCHMEN, THE BORNLESS ONES, DARK TAPES, EAT LOCAL, DARKEN, DAVE MADE A MAZE, SEQUENCE BREAK, M.F.A. ROMEO’S DISTRESS and GET MY GUN.