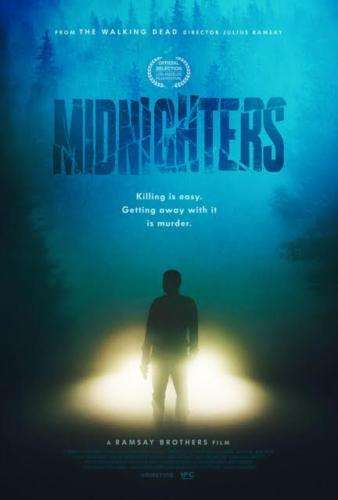 IFC MIDNIGHT will release MIDNIGHTERS in Theaters, on VOD and Digital HD on March 2, 2018.

MIDNIGHTERS is the theatrical debut of director Julius Ramsay, who is known for his work on AMC’s THE WALKING DEAD. The film was written by his brother Alston Ramsay, who served as speechwriter and senior advisor to Secretary of Defense Robert Gates, General David Petraeus, and Secretary of Homeland Security Jeh Johnson in Washington, D.C., before moving to Los Angeles to pursue filmmaking.
The film has compelling and complicated female leads played by Alex Essoe (STARRY EYES, TALES OF HALLOWEEN) and Perla Haney-Jardine (STEVE JOBS, SPIDER-MAN 3), along with strong performances by Dylan McTee (MTV’s SWEET/VICIOUS) and Ward Horton (ANNABELLE, THE WOLF OF WALL STREET).

Midnight, New Year’s Eve: when all the hopes of new beginnings come to life – except for Lindsey and Jeff Pittman, whose strained marriage faces the ultimate test after they cover up a terrible crime and find themselves entangled in a Hitchcockian web of deceit and madness. From WALKING DEAD director Julius Ramsay, MIDNIGHTERS is a layered, enigmatic thriller set in the Gothic backwoods of New England – the perfect place to get away with murder.

BLISS From Joe Begos To Premiere At Tribeca Film Festival