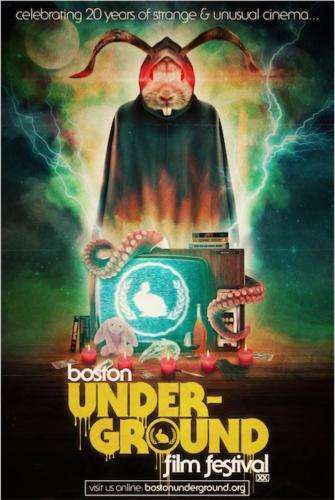 A few final notes on the 20th Boston Underground Film Festival as it comes to an end.

I didn’t have much time to spend on the shorts films offered up, but the latest from Izzy Lee MY MONSTER  is a fun little that’s a lot less serious than the likes of FOR A GOOD TIME CALL and RITES OF VENGEANCE.

Jessica Curtright and Santiago C. TapiaI’s IT BEGAN WITHOUT WARNING is still on the festival circuit and as much fun the second time around. A mix of WHO CAN KILL A CHILD and the writing of H.P. Lovecraft it would make a great feature.

Two features that I can only do capsule reviews of until they get released, but still deserve a mention:

LET THE CORPSES TAN, is the latest from Hélène Cattet and Bruno Forzani who gave us AMER and THE STRANGE COLOR OF YOUR BODY’S TEARS. If you thought they were overly stylized wait till you see this. An adaption of the 1971 novel of the same name it concerns thieves with a fortune in gold who plan to hide out in an abandoned village. But it’s not totally abandoned, an eccentric artist and her entourage. Add in some unexpected visitors and you have the makings of a bloody conflict.

What could have been a great throwback to vintage Eurocrime film is badly hampered by the filmmaker’s need to let style run rampant over everything else. I frequently lost track of just what was going on. Worth a look for fans of their other films, but others will be even more lost than I was.

GOOD MANNERS from Marco Dutra and Juliana Rojas is a Brazilian tale of friendship, pregnancy, and werewolves. Inspired by Angela Carter and Disney animation this is a unique and frequently touching tale. Wrapping social commentary about wealth, class and racism into a kind of lycan coming of age film.

At over two hours it could use shortening but it’s rewarding for those who stick with it. Recommended for those looking for a different kind of fairy tale.

I’m looking forward to next year’s festival and hoping I have time for a few more of their offerings.