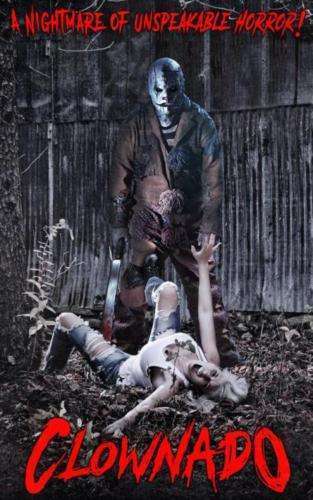 Twisted new graphic for CLOWNADO!!! The IndieGoGo is winding down… 3 weeks left!!!! It is a wild and crazy title, but with Todd Sheets as the director, you should know to always expect the unexpected. This is no comedy, it is not a parody nor is it near as ridiculous as the title suggests.

It is a Horror film, and it is going to be over the top. Think Evil Dead, Dead Alive, Bad Taste and Texas Chainsaw Massacre if Lucio Fulci was directing, all mixed in a swirling storm of insanity! Now add in the cinematic visual style known as NOIR…. intense composition with shadow and light…. and a bit of that incredible John Carpenter suspense (John was also influenced by Noir classics)….

It is our intent to make a kick-ass movie with scares and gore and a damned good script. Something very original and something you have never seen before. And I promise you one thing, as my old friend Chas Balun used to say, we WILL deliver the groceries! Our main goal is to entertain you, and I will NOT stop until we do…. Keep an open mind and give us a chance… and we won’t let you down!

But none of that matters WITHOUT YOUR HELP. We have all the gear and the crew and half of the cast all set and ready to roll, but we are a small company, and none of us take a salary… EVER. We pour every dime back into making bigger and better movies. But, unlike some of our other films, we cannot do this one alone. The makeup effects and visuals do cost a bit… we want to do this with Practical Effects. Some visual effects will be done on a computer, but it is not CGI…. mainly for stuff like mattes and wire removal. And we need to be able to fly in our genre icons, and put them in a hotel. As with our other films… every dime will be used for production and it will ALL go onscreen. We even asked people on the Official CLOWNADO Facebook page and decided to do TWO campaigns, one on GoFundMe and one on IndieGoGo so you can use your own preferred site.

Time is ticking, so please help!!! Share this post, spread the word and let’s do something awesome together!!!