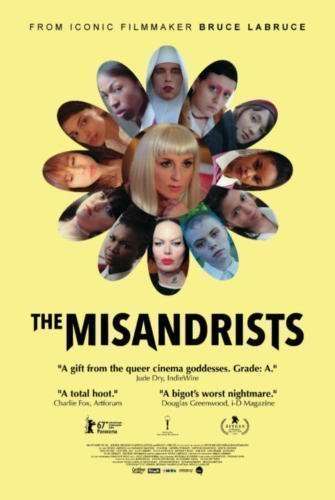 Bruce LaBruce ( L.A. ZOMBIE, OTTO; OR, UP WITH DEAD PEOPLE) is already a controversial figure in both LGBT and mainstream cinema and his current film THE MISANDRISTS is only adding to it. Of course a film about radical Lesbian politics written and directed by a man, (even a gay one), is going to provoke controversy. But would you expect anything else from one of the founders of queercore?

Taking place “Somewhere in Ger(wo)many,” the film opens with Volker (Til Schindler THE NIGHTMARE) a wounded male revolutionary being hidden from the police by Isolde (Kita Updike) against the advice of her girlfriend Hilde (Olivia Kunisch). The pair are members of the Female liberation Army (FLA), a feminist terrorist group under the leadership of Big Mother ( Susanne Sachße  BANDAGED). Their aim is to topple the patriarchy by exploiting the power of pornography.

LaBruce has always borrowed from other films, frequently B movies. Here though he goes a bit more upscale, referencing THE BEGUILED and THE CRYING GAME in this tale of politics, sexual and otherwise. There’s also the usual mix of fetishistic elements, philosopher quoting speeches and explicit sex scenes the director is known for. However he seems a lot less interested in the scenes between the girls than the male/male scenes he’s known for. They are in here too, so those with an aversion to such things might want to skip this one.

As a film, THE MISANDRISTS is certainly entertaining on it’s own unconventional terms. But it’s meant as a statement as much as a piece of entertainment. And that’s where its problem lies. The world the FLA envisions doesn’t really seem like a feminist creation. Female dominated yes, but with no real female qualities to it, it’s simply present society with the power structure reversed. They even use gender swapped versions of medieval prayers. “Blessed be the Goddess of all worlds that has not made me a man.”

I’m not an expert in this area but I would think that their agenda would reflect the difference in thought and perspective between men and women. Instead it’s just current society inverted. “Meet the new boss…Same as the old boss” as The Who put it.

Granted LaBruce has taken shots at radical gay groups in past films such as THE RASPBERRY REICH and it’s possible he’s doing the same here. But that wouldn’t fit well with the feel of the rest of the film. It’s been the subject of speculation by writers more knowledgeable on the subject than me and I’ll leave it to them. Either way it’s an interesting film to watch.

THE MISANDRISTS will begin its national rollout May 25th with a week long run in New York City at the Village East Cinema. The film will switch coasts for a week’s showings in Los Angeles at the Nuart Theatre starting June 1st. LaBruce will introduce screenings at both openings.

The Misandrists - Official US trailer