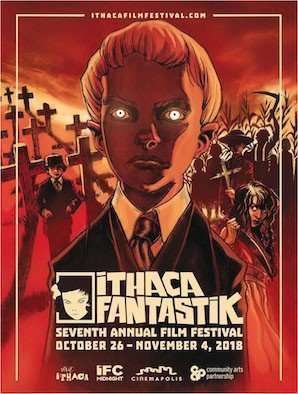 Now in its seventh year, Ithaca Fantastik is unleashing some cinematic goodness on Central New York. Running from October 26th to November 4th the schedule includes a wide range of films new and old. You can see the full schedule here, but let me point out a few highlights.

PIERCING is Nicolas Pesce’s followup to his well-received debut film, THE EYES OF MY MOTHER. This time he’s delivered a giallo influenced tale of a man on a business trip. And his business is murder.

ONE CUT OF THE DEAD. Another zombie film, but something unexpectedly different. A film within a film within a film. An ambitious if unspectacular director is hired to shoot a 40-minute zombie piece all in one take. However, with drunks, divas, meddling studio execs and malfunctioning equipment to contend with the zombies are the least of his problems. Filled with action and laughs it’s one of my favorite films of the year.

For those who remember it, the trial of Mike Diana was a chilling moment of censorship. Now cult director and film historian Frank Henenlotter chronicles it in BOILED ANGELS: THE TRIAL OF MIKE DIANA. The story of the only artist in American history to be convicted of obscenity, it should be essential viewing for all creative types.

GIRLS WITH BALLS is a backwoods horror spoof from France that pits a women’s volleyball team against a pack of inbred hunters. But these young athletes may be more resourceful than the hunters give them credit for. Serve. Set. Spike. Kill!

And for those that like short films there are multiple blocks of shorts to deliver whatever you’re looking for.

You can get the full schedule, directions and ticket information at the Ithaca Fantastik website. Check it out, with a wide range of premieres, festival hits, and retro programming there’s sure to be something to suit you.