When I first tuned into the film Valhalla Rising on Netflix, I didn’t know what kind of movie I could expect. I hadn’t watched any trailers, so from the look of the movie it reminded me of an episode of the popular TV show Vikings that I also enjoyed. When you just want to be in a Netflix coma, you don’t want to work too hard to find something you think you’ll like, right?

Director Nicolas Winding Refn , the creator of the Pusher Trilogy, seems just as interested in staying true to his own vision here in Valhalla Rising. He’s also created other Danish fare that deviates from the norm, and seems just as willing to go the non-commercial route for this film. The result is heavy on atmosphere but light on story. The film’s title comes from the combination of Kenneth Anger’s films Scorpio Rising and Lucifer Rising, using a Viking theme.

Starring Mads Mikkelsen (Polar, Dr. Strange), this movie also features a group of Scottish actors and a young boy known throughout the film only as The Boy (played by Maarten Stevenson). The movie begins with Mikkelsen as a mysterious mute Thrall, fighting for his life. Thralls were like servants in the days of the Norse people, they were treated like slaves. He spends his days as a prisoner, we learn, because he killed a chieftain’s son. Mikkelsen’s character is held captive by a Norwegian chieftain from Sutherland in the Highlands of Scotland. There, he is forced to spend his days fighting to the death against other slaves.

When Mikkelsen’s character isn’t fighting other slaves, he spends his days in a tiny, roughly-hewn cage. This cage, and Mikkelsen’s rough looks, missing an eye, give the movie a sense of grittiness. We later learn that his name is One-Eye. When he sits in his cage, a young, blond Thrall boy ladles his meals through the bars to him.

One day, One-Eye dreams of finding an arrowhead in a pool. This dream comes true when he is allowed to bathe and indeed finds one. When he is led by guards to his next fight, he escapes and eviscerates them all. If you’re looking for a movie with some blood and guts, the first half of the movie’s got it in spades. Certainly, this was one of the more engaging parts of the film for me, watching Mikkelsen disembowel dudes.

Soon, he finds, after creating a path of destruction in his wake, that the boy who looked after him is following him. Since he is mute, the boy speaks for him and becomes his voice, in a way. This partnership comes in handy when the two come across a group of early Christians who persecute Scandinavian heathens. The early Christians are looking for the Holy Land, Jerusalem, making it their life’s journey. The two miscreants, One-Eye and the boy, get swept along in their travels.

The movie starts strong, perhaps placing one of it’s very best four “chapters” at the beginning. However, the film does not finish the story at the end at the same tempo. I welcome the challenge of watching any strange old movie, though, and this movie is no exception. After the first half of the movie, however, it becomes real tough to tell what is going on. The narrative gets lost for a bit at around the middle of the film, after they depart for the Holy Land. There are many stretches of silence, only briefly broken up by conversation. The movie looks to have been filmed entirely outside, in Scotland, namely the Scottish Highlands, which are utterly captivating here.

The sets are beautiful, and the camerawork serviceable despite the odds. The actors are Scottish, apart from Mikkelsen (and perhaps Maarten Stevenson). The ubiquitous wind is a feature throughout, which sometimes makes it tough to hear the dialogue. The acid tones and lighting give the film its grittiness, but also are partially to hide how low budget the film seems at a glance.

And through it all, the enigmatic Mikkelsen never breathes a word. There are many theories as to why he never speaks, most obvious of them all being that he’s a mute. It’s kind of refreshing in a way to see a movie like this, but Mikkelsen, as always, merely stone faces his way through his role. The Scottish actors that otherwise hold up the dialogue in the film are not bad. In a way, the movie reminded me of 2007’s Pathfinder, a movie that could have been this movie’s sequel, in a way.

It’s tough to tell if a movie like this makes Mikkelsen a better actor. I’m not willing to write Mikkelsen off completely. He’s got a brilliant sense of hand-to-hand combat, even if the combat he’s using in this movie is wrong for the period. And the no-talking would mean that he’d have to physically do a lot more acting. At the end of the day, a movie like this just further cements the theory that Mikkelsen, although he is handsome, cannot emote or do a wide range of facial expressions.

All in all, I would recommend Valhalla Rising if you are a curious, patient movie-goer, if for no other reason than that it is on Netflix. This is one of those movies you’ll either love, because you like Winding Refn’s stuff, or you won’t. This slow burner of a period film is hardly a staple of Mikkelsen’s whole repertoire, but it may be a place to start watching his films. But, if you’re looking for something different and don’t mind a gory film, Valhalla Rising is an experiment to try.

Valhalla Rising is available on Netflix. 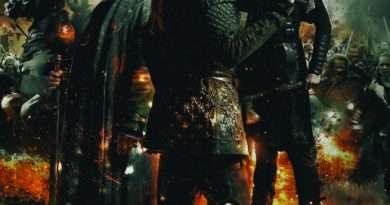