I reviewed the original Alien Domicile just about a year ago. It was an OK low budget film about aliens in a secret government facility. Not horrible, but nothing really great either. And not something you would think would warrant a sequel. But here we have Alien Domicile 2: Lot 24, which has no connection that I can see, either in plot or cast, to the original.

Given the “Alien Domicile 2” digitally superimposed over the film’s credits and the Facebook page that refers to the film as Lot 24: The Movie. Then there’s all the “Lot 24” promo material in the IMDB picture gallery. Going by that I’m assuming this was re-titled for quick cash in. The question is, regardless of the title, is it any good?

Rachel(Kathryn Whitney) has an uncle, Dr. Moss, who’s gone missing. So she and her friends go out to camp on the lot he owned and was staying on when he vanished. It seems her uncle was some kind of botanist, studying the local trees. And had an interest in the possibility that aliens were visiting us via said trees. They all call the place creepy but decide to stay anyway.

The next morning Sheriff Po (Trenell Blanks) stops by. He has a weird story to tell when asked about Dr. Moss. Even more, creeped out they decide to go for a hike in the woods. Without their phones, because that would interfere with them enjoying nature. Of course, there really is something out there. I’m not saying its aliens, but the movie is called Alien Domicile 2: Lot 24.

Apart from the alien/tree link though this is a pretty familiar tale. Kids go in the woods and ignore the warning signs. Bad things happen in the last act. The alien itself looks fairly creepy. Alien Domicile 2: Lot 24 as a whole looks good considering its budget, writer/director Curtis Johnson knows how to make a good looking film. He just needs to learn how to make an interesting one.

The connection between the aliens and the trees could have been interesting with a bit of work. And put forward the message the script tries but fails, to deliver. Which is too bad because Alien Domicile 2: Lot 24 could have been at least watchable. As it stands it can’t even match the original’s modest accomplishments.

Alien Domicile 2: Lot 24 is available on Amazon and other streaming outlets via ITN Films. 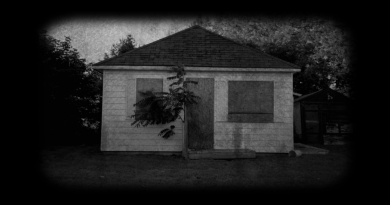