Colin Minihan is a busy guy. In the past few years he’s been piling up credits for writing and directing the likes of Grave Encounters and What Keeps You Alive. He’s also written several scripts for other directors such as the film at hand, Z. Like his first collaboration with director Brandon Christensen Still/Born, this is another tale of the horrors of parenthood.

Things don’t get any better as Joshua’s imaginary friend Z starts requesting a place at the dinner table. Then convinces the little guy to do things that make him a pariah with the other kids and eventually kicked out of school. Elizabeth is blindsided by this as for some reason Kevin has kept it from her. As her son’s behavior heads into criminal territory it triggers repressed memories in Elizabeth. Z might not be as imaginary as they have been believing.

Like many recent genre films with a domestic theme, Z starts out firmly in Lifetime Channel mode. Thankfully it gets out of it a lot quicker than most. By the 30 minute mark, it’s obvious Joshua’s issues aren’t psychological. Granted it takes his parents a bit longer to figure that out, but that allows for a great turn by Stephen McHattie (Pontypool, Exit Humanity) as Doctor Seager a child psychologist who helps Elizabeth make the connection between her childhood and what’s happening now.

At times the film feels like it could be a prequel to the season’s other evil imaginary friend film Daniel Isn’t Real. But mostly Z walks a fine line between the creepy kid and family curse genres before finally showing its hand. Oddly enough the scene where it does is both one of the best and worst in the film. It’s effectively creepy and makes it incredibly clear just what’s going on. But on the other hand, there’s some awful CGI and you can’t help wondering how none of the neighbors are noticing this.

The last act of Z manages to build to an extremely tense payoff. It’s nothing that you would have expected at the film’s start either. It’s very refreshing to see a film like this go somewhere unexpected these days. It’s worth seeing for that alone.

Z will play this year’s Blood In The Snow film festival on November 26th. Hopefully, it will get picked up for distribution shortly. 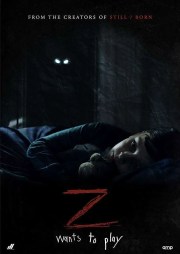